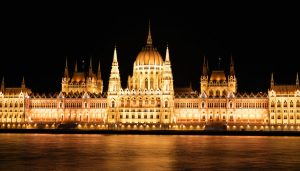 The history of the Jews in Budapest is a bit complicated and tortuous. Like many places in Europe, the Jews were alternatively invited or banished based on the mood and economic desires of the rulers of the time. In 1279, the Jews of Buda (one of three cities eventually united into Budapest) were forced into a ghetto and required to wear a red badge. The Jews were expelled from Buda in 1349 and 1360, and allowed back in 1364. In 1526 when the Ottomans captured the city, they expelled the Jews, but then they were allowed back in 1541, and they became quite prosperous, active in banking and international trade.
In 1686, when the Austrians conquered the city, they murdered and ransacked the Jewish community. In 1746, Empress Maria Theresa of the Hapsburg dynasty expelled the Jews, and we have records of the 1768 census which quite clearly states, “Jews do not live in Buda,” and “Jews do not live in Pest.” In 1783 Emperor Josef II allowed them to return.
The ping pong action finally stopped in 1840, when the Hungarian National Diet (Diet refers to a Parliament, not a way of eating) officially allowed the Jews to settle in Pest. From 20,000 Jews in 1850, the Jewish population of Budapest exploded for the next seventy years, reaching over 200,000 by the early 1900’s. Many of the Jews living in Budapest were fabulously wealthy, and in 1854 they began building the Dohaney Street Synagogue, at the time the largest and most beautiful synagogue in the world.
The twentieth century was not a great one for Jews in Budapest. Despite many of them serving with distinction in WWI, the atmosphere clouded for the Jews soon after the Great War. Admiral Miklos Horthy, a noted Anti-Semite, was the leader of Hungary from 1920-1944. Despite his official title being, “His Serene Highness the Regent of the Kingdom of Hungary,” he wasn’t very serene to the Jews. Viewing them all as communist collaborators, he created a “Purification” campaign mostly aimed at purging the Jews. Jews were not allowed into many professions and educational institutions, and state-sponsored Anti-Semitism was a regular occurrence.
As the Nazis rose to power in Germany, a new group called the Hungarian Arrow Cross arose that was so violent in their Anti-Semitism that they almost made Horthy look serene. Jews began being beaten in the streets. When WWII began, Hungary was officially part of the Axis Powers, but when Hitler YS”V found out that Horthy was secretly opening talks with the Allies in 1944, the Germans invaded Hungary, taking control of the entire country, where they were often welcomed with open arms.
The darkest moments of Hungary’s history occurred in 1944. On the day that the Nazis assumed control of the country, Adolf Eichman arrived with one goal, exterminate the 800,000 Jews of Hungary as soon as possible. Nowhere was the Nazi beast more efficient than in Hungary. From Mid-May to Early-July, over 437,000 Hungarian Jews were sent to Aushwitz-Birkenau, the vast majority of them marched directly from the trains to the gas chambers, their lifespan in Birkenau less than a few hours. The Jews of Budapest were supposed to be the last to be deported and because the Germans were forced to halt the deportations in July, the majority of the survivors from Hungary were those that lived in Budapest.
Even though the Germans had stopped killing the Jews en masse, the Hungarians were not done. The Hungarian Arrow Cross picked up where the Nazis left off. Every night hundreds of Jews were marched to the banks of the Danube, forced to undress and then machine gunned into the river. The Danube flowed red for months.
Here’s the problem. Budapest is a beautiful city. Really Beautiful. Named the world’s second best city by Conde Nast Traveler, and Europe’s seventh most idyllic place to live by Forbe’s, the city abounds with beautiful buildings, monuments, and parks. Andrassy Boulevard, the Champs-Elysees of Budapest is wide, tree lined, and filled with magnificent buildings and shops, crowned by the Opera House, a building of impossible grandeur both inside and outside. Andrassy Boulevard leads into Heroes Square, a massive open plaza filled with statues and monuments to Hungary’s various heroes and flanked by the equally impressive Palace of the Arts on one side and the Museum of Fine Arts on the other. Behind it lurks the fairy-tale like Vajdahunyad Castle.
The many bridges over the Danube are majestic and beautifully lit at night, and the building that flank it are magnificent. The Hungarian Parliament on the Danube puts the British Parliament on the Thames to shame. Buda Castle looks down at the river with smug nobility. Fisherman’s Bastion, the Neo-Gothic terrace overlooking the river, was definitely made for the most upper crust of fisherman. 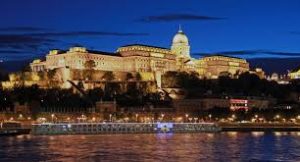 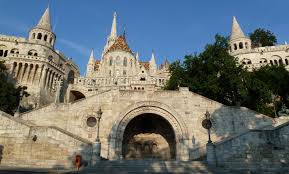 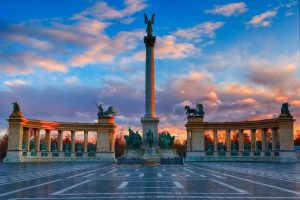 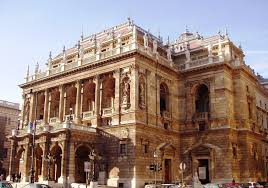 Parsha Dvar Torah
Last week’s Parsha ended with the Midianites sending their women to seduce the Jews into immoral relationships, and from there swaying them to worship the gods of Midian. The prince of the tribe of Shimon led the way, publicly defiling himself with a princess from Midian. Pinchas, the grandson of Aaron (and great nephew of Moshe), saves the day in an act of zealousness for G-d’s honor, and puts the two of them to death. This shocks the people out of their temporary blindness and the sinning stops, as does (or did, depending on the tense you have chosen) the plague Hash-m had sent as punishment for their immorality and idol worship.
This week’s parsha opens with G-d rewarding Pinchas. “Therefore say: Behold I have given him my covenant of peace.” (Numbers 25:12) Why does Pinchas get a covenant of peace specifically in reward for this act? (I probably would have just asked for a Corvette! No, no. That’s not going to look good. I probably would have asked for a Sefer Torah!) This question is strengthened by the fact that the Torah introduces his reward with “Therefore,” as if the reward is directly linked to the act. What is the link between the two?
There is much debate about how one defines him or her self. Some say, “You are what you wear.” Now, I know this is going to be controversial, but I believe that to a certain degree that is true. We do choose our clothing, and often we elect to wear certain clothing because we want to send a message of how we see ourselves in the hope that others will begin to see us in that way as well. Other people will tell you, “You are what you eat.” There is a little less truth to that statement, because if it were true I would be half wheat and half cow hooves (I just had a hot dog in a bun).
In Judaism we believe that you are what you do. By nature, we may be languid, lazy, lackluster, languorous, and lethargic, but if we energize ourselves and become active people, then we have changed who we are and we are now   vigorous, vibrant and vivacious people brimming with vim and vitality. This is due to our actions entering our psyche, and transforming our very essence.
Using this line of reasoning, Pinchas, who had just committed a violent act, would become a more violent and aggressive person, no matter how noble his intentions. But G-d would never allow a negative result to be the outcome of a virtuous act,; therefore, G-d gave him a special covenant of peace to protect him from any character defects he may have acquired through his violent action.
This idea is very empowering, as it allows us out of any box we may have placed ourselves in. So often, we live our lives believing that we are selfish, lazy, or disorderly. But we learn from here that all we have to do is to act selflessly, energetically, and in an orderly fashion and we will become different people! Most of you are probably thinking, “Sure, easier said than done!” but that is just the lazy part of you speaking. Instead, we must simply follow the Pinchas strategy, and get up and do, because that is what changes us.

Parsha Summary
This week begins with the reward given to Pinchas for his glorification of  G-d by eradicating one of the leaders of the tribe of Shimon who was publicly committing adultery with a princess from Midian. The Midianite people had sent their daughters to seduce the Jews. At the moment of their highest vulnerability, the women would entice the Jewish men to serve the Midianite Gods. Pinchas, with his quick action, brought the people back to their senses. The reward Pinchas received was the ability to join the ranks of the Kohanim, the people whose entire raison d’etre is to bring people closer to G-d by cleansing them of the negative effects of their sins. After this incident, the Jews went to war with the Midianites, in retribution for the spiritual war the Midianites waged against the Jews.
As you probably recall, in the beginning of the Book of Bamidbar (Numbers), there was a major census taken of all the Jews. That was at the beginning of the Jews’ forty years in the desert. Now, at the end of their 40 year journey, G-d commands Moshe to take another census. Why was another census necessary? A number of 585reasons are given. First, just as a shepherd counts his sheep after a wolf attacks, so too, G-d, after forty years and a number of punitive plagues, counts the Jews to see how many remain. In addition, just as Moshe counted the people at the beginning of his leadership, now that his watch is about to end, he counts them again before returning his flock to their master.
Another purpose of the census was to count the people by family, as this would determine their portions of land when they entered Israel. At this point, the daughters of Tzelafchad came before Moshe to make a request. They were from a family with only women, five of them to be exact. Their father had died, and they were concerned that with no men to represent them, their family would get no portion in Israel. Moshe, after a quick consultation with G-d, told them not to worry, as they would get a portion of the Land of Israel in lieu of their father.
(Here is an interesting note: 2000 years ago, Jews were the most liberal nation in the world in regards to women’s rights. They gave women land, offered them many forms of protection in the case of divorce or death of a spouse, and gave them equal protection under law. Today, people look at Orthodoxy and claim that it represses women. It is important to try to understand the Orthodox position before judging them, in light of their record of being the foremost champion of women’s rights for thousands of years.) Once dealing with laws of inheritance, the Torah here summarizes the Jewish laws of bequest and inheritance.
The Torah, now close to wrapping up the narrative of the Jews’ desert experience, tells of G-d informing Moshe that he will die imminently and he therefore has to pass the mantle of leadership onto his principal pupil, Joshua. The Parsha then concludes with a list of the sacrifices brought on all the various festivals. That’s all, Folks!
Quote of the Week: Time is what we want most, but we all use worst. – William Penn
Random Fact of the Week: “Dreamt” is the only English word that ends in the letters “mt”.
Funny Line of the Week: Money talks, but all mine ever says is “goodbye.”
Have a Noteworthy Shabbos,
R” Leiby Burnham

Are you financially literate?
Parshat Behar 5782