Napoleon once passed a shul in Paris on Tisha B’Av. Hearing crying and wailing coming from inside and thinking that there was something terrible going on, he stepped inside to see what he could do to help. What he saw shocked him. People, with lit candles, were sitting on the floor, reading from books and crying. He asked his advisor, “What’s going on in here? Why are they crying and wailing?” His advisor told him, “These Jews are crying about their holy temple that was destroyed on this day.” Napoleon responded, “What? Such an important thing happened, and I, the king, know nothing about it? Why was I not told?”

“This happened a few thousand years ago, not just now!” replied his advisor.

“Really?” said Napoleon, “And they are still crying about it? I swear that these people will yet see their Holy Temple rebuilt in their own land. What other nation would mourn their loss as if it just happened, and retain their hope for the Temple, for thousands of years?”

Napoleon’s words echoed a truth that our sages themselves expressed in the following statement.

It is very rare today to find someone who truly mourns the destruction of the Holy Temples. Even very religious Jews find it hard to sincerely feel sorrow and mourning over the loss of the Holy Temples that were destroyed, 2,604 and 1,946 years ago, respectively, on the 9th of Av.

We perceive that we are living full Jewish lives according to the Torah. We keep Shabbat to the letter, eat only kosher, and perform the Torah’s commandments with great love and devotion. So why, exactly, do we need the Holy Temple? How would Jewish life be different if the Holy Temple stood where the Mosque of Omar stands in Jerusalem? Would it be like the Western Wall, something we would visit once or twice in our lifetimes? And so what if a person never visited Israel to see the Western Wall? Is he not a good Jew? What is there to mourn about?

After the giving of the Torah on Mount Sinai, Hashem commanded the Jewish people to build the Tabernacle. The Tabernacle was indeed a modular, portable, miniature Holy Temple. It travelled with the Jewish people and served them for 480 years until King Solomon built the permanent structure in Jerusalem.

Nachmanides, in his commentary on the Torah, tells us, that the purpose of the Tabernacle was so that Hashem would have a dwelling place among the Jewish people. Since the Jewish nation was chosen to be a holy nation that represents Hashem through keeping their covenant with Him – the Torah- it was appropriate that there be a sanctuary where Hashem’s presence could be to dwell among them.

The mishna in Pirkei Avot tells us that ten miracles occurred in the Holy Temple at all times.

I will speak about a few of these miracles to bring out a point.

The daily sacrifices and all personal sacrifices were brought on the altar, which was in the Temple courtyard, outside and exposed to the elements. Yet, the constantly burning fire was never extinguished by the rain, no matter how hard it rained. Additionally, the smoke always rose upwards in a straight column, no matter how windy it was. The wind did not disperse the smoke! Additionally, never did a fly enter the Temple courtyard where the sacrifices were prepared and offered. (Think of what happens when you bar-b-que.)

On Yom Kippur, despite the throngs of people who came to the Holy Temple for the special Yom Kippur service, they could all pack into the area designated for guests. Things were tight, but everyone fit. And, most extraordinarily, at the few times during the Yom Kippur service when all who were present were required to prostrate themselves, despite their standing together shoulder to shoulder, miraculously, when it came time to bow down, everyone had the room that he needed. Space expanded to accommodate the need.

Along the same line, during the three festivals, Pesach, Sukkot and Shavuot, all able bodied men who owned land in Israel were obligated to visit the Holy Temple. Men from all over the country would converge on Jerusalem, yet no one ever said, “It’s too crowded for me in Jerusalem.” Once again, space expanded to accommodate the immense crowd.

There was another miracle that the Mishna does not list because it was not a constant miracle: That is the miracle of the Pascal offering that the people brought on the 14th of Nissan, Passover eve. This special sacrifice had to be brought after mid-day but only until sundown. In Jerusalem on April 10, 2017, Passover eve, mid day was at 12:41:42 and sunset was at 7:09:39. It is reasonable to assume that that figure hasn’t changed much. That is exactly 6 hours 27  minutes and 57 seconds for the entire Jewish people to bring all of their Pascal offerings. But how many were there to bring? The Talmud reports that one year they counted the tails of all the sheep that were brought as sacrifices and they numbered 1.2 million. Could such a thing be possible? So many sacrifices in a little less than six and a half hours? That comes out to 184,615 sacrifices per hour, or 3077 per minute, or 51 sacrifices per second!

We see that neither space nor time as we know it existed within the Temple precincts. Additionally, the  elements of nature, rain, wind, and even the flies, had no influence in the Holy Temple. This was a miraculous place.

In the same way, the Holy Temple was like an island of heaven on earth. When you entered the Holy Temple, it was like being in heaven, a place where nature’s rules and restrictions are suspended. Time and space do not exist there. Hence, no matter how many people came, there was room for them. As many sacrififices as there were, there was time for them.

When a person entered the Holy Temple, he could experience to a great degree the same revelation that the Jewish people experienced at Mount Sinai. It was like walking into Hashem’s palace. There was no doubt about Hashem’s reality  because you were living in His presence!

Every Jewish man who owned land in Israel (probably most of them) was obligated to avail himself of a dose of this spirituality at least three times a year. For the person seeking to lead a spiritual life, this was a boon. If ever a person felt himself feeling weak and needing a bit of inspiration, he could always make a trip to the Holy Temple and become rejuvenated.

However, to the person who was not leading a particularly spiritual life back home because he was engrossed in persuit of material wealth, this visit was a scary prospect. Besides seeing Hashem in the Holy Temple, Hashem was also going to look at him very carefully. If a person wasn’t up to snuff, perhaps there would be consequences.

In this light, we can understand what the sages meant when they said that Nebuchadnezzar and Titus, who destroyed the first and second temples, actually only demolished an already destroyed building. The Jewish people themselves had already rendered the Temples obsolete when they simply stopped visiting them, and stopped using them to connect them to Hashem. The buildings, as magnificent as they were, stood useless. People were so caught up in their material lives that they were uninterested in what the Holy Temple had to offer, so they stopped going.

Psalm 73 expresses how King David felt his faith in Hashem weakened by  the seeming tranquility and peace of the evil-doers.  “My feet were almost turned astray, my steps were very nearly washed aside… when I saw the peace of the wicked. ”

What restored King David’s faith in Hashem? “Until I came to the sanctuaries of Hashem, I contemplated their end.”(Verse 17) This is where one would go to callibrate his thoughts with Hashem and His Torah.

When the Holy Temple was in service and at its peak, it clarified and refined  the entire outlook of a Jew in life. It allowed people to see clearly that Hashem controls the world. Nature’s laws are suspended in the Holy Temple, and Hashem controls nature In reality, in every aspect of my life also, Hashem is controling  everything from behind the scenes.

King David had the Tabernacle to go to when he felt weak and needed spiritual support.  What are we to do now that there is no Holy Temple? Is there a substitute?
Our Sages ask: Where did all the holiness from the Holy Temple go? Did it evaporate into thin air?

They answer: It was divided up among all the shuls and Torah study halls of the yeshivot. This answer resonates with us, as we also feel uplifted and supported in our faith in Hashem when praying in shul and when studying Torah in a yeshiva.

I believe that we experience this every week right here at Partners in Torah. The room that we learn in is a veritable yeshiva study hall. The Torah learned in pairs generates a holiness that is felt by every person in the room. This holiness penetrates our holy souls and elevates us to make us better Jews. When we miss a week, we feel the loss of growth that we could have had, had we been able to attend.

Now we can understand what we are missing in the Holy Temples. We are lacking the place where we could clearly see Hashem. This would make us so much more aware of Him and help us serve Him so much better.

My feeling is that at this time also, it is difficult to choose a path of service to Hashem. The world saturated in materialism beckons us and inundates us with the idea that we are here for fun and pleasure, the “here and now.” Enjoy life while you can; eat, drink and be merry for tomorrow you will die. It takes a special person to see beyong the next pleasure and to ask, “What is it all about? Is that really why Hashem created me? To enjoy another ice cream cone?” Just as I am bucking the tide these days, I reason to myself, I would have done so then also.

As far as the people who learn at Partners in Torah, I think it is possible to say the same. How many of the tens of thousands of Jews that live in Metropolitan Detroit make time to tend to their spiritual growth? A very small fraction. And the people who do are swimming against the tide, big time! I think it is reasonable to say that they would have done the same in the time of the Holy Temples. 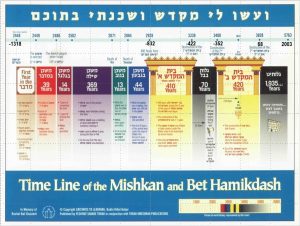 Power of the Parsha: Vayetzei